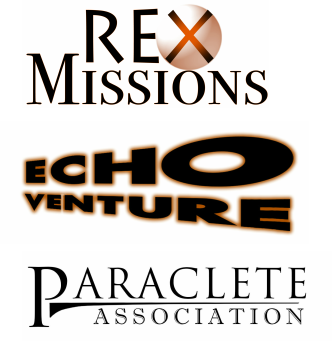 ​
WELCOME to the various SITES, SCOPES, SERVICES, &
MINISTRIES of REX MISSIONS & the REXS
​
Click on the top right box to access Echoventure and Paraclete Association. Go to www.letbible.com or www.biblehub.com/let to see the Literal Emphasis Translation New Testament online

​
PLEASE TAKE NOTICE of THIS GREAT NEWS
​AS OF 11-24-17 the NEW TESTAMENT TRANSLATION HAS A NEW WEBSITE OF ITS OWN-
WWW.LETBIBLE.COM
​The LETBIBLE stands for
Literal Emphasis Translation Bible.

If it was compared to other translations, it has a literalness stronger than the KJV and Darby, possesses a Greek to English structure similar to the Young's Literal Translation, and pulls hard in its emphasis and transliterations from the Latin Vulgate, Wycliffe, Tyndale, Geneva, Bishops, and many other older works. It relies heavily on the scholarship behind the Discovery Bible and the interlinear bibles in the Logos, WordSearch, and Scripture4All programs. It works hard to give emphasis and consistency in translation to the fuller meanings of Greek vocabulary and prepositions that are missing in translation into English.

It is recommended that you use this as a reference work and supplement to your existing Bible.
​Personally, I enjoy using it in church and bible studies to make comparisons and ​highlight unseen meanings.
OUR VISION, MISSION, & PASSION
​are simple
TO "PARACLETE" & TO "ECHOVENTURE"

We are on a mission to promote a movement that calls upon others to follow Jesus' example to echoventure and paraclete as a way of life and
as a culture within churches and communities.

To "PARACLETE" literally means,
"to be called close alongside another"

What did "paraclete" mean to Jesus, the Apostles, the Greeks, the Jews, and
other ethnicities of that era?

A paraclete meant one that was a comforter, counselor, consultant, coach, helper, guide, mentor, mediator, lawyer, advocate, intercessor, reconcilor, and more all rolled into one.

It is used 5 times in the New Testament and is a word picture that can not be translated into English adequately with one word. It is translated as Advocate, Counselor, Comforter, and Helper in various translations. The term is only used of the Holy Spirit 4 times in the most intimate of the Gospels and of Jesus 1 time as He is already in heaven at the throne of the Father God Almighty.

ECHOVENTURE & THE PARACLETE ASSOCIATION HAVE THE
SAME MISSION OF "PARACLETING"

THE PARACLETE ASSOCIATION AND ITS ECHOVENTURE SERVICE SERVE AS
A PARACHURCH MISSION TO PROVIDE SPIRITUAL LIFE COACHING IN A FOCUSED APPROACH.
​WE SERVE AS A CULTURAL BRIDGE TO ASSIMILATE THE UNCHURCHED INTO THE FELLOWSHIP OF BELIEVERS.
​
WE SEEK TO BUILD A NETWORK OF PARACLETES THAT CAN BE CALLED UPON TO COME TO THE CLOSE SIDE-AID OF OTHERS IN THEIR COMMUNITY AND PROMOTE A CULTURE OF CARE.

ECHOVENTURE IS THE LIFE COACHING VENTURE SERVICE
THAT SEEKS TO INSPIRE A YOUNGER GENERATION
THROUGH THOSE THAT ARE SEASONED "PARACLETES."

SEE THE ECHOVENTURE TAB ABOVE AND ON FACEBOOK FOR MORE INFO.

THE PARACLETE ASSOCIATION IS A
VOLUNTEERING-​NETWORKING-SPONSORING ASSOCIATION
THAT SEEKS TO PAIR COMMUNITY NEEDS
​TO THOSE THAT POSSESS THE ALTRUISTIC CARE TO MEET THEM.

WE ENVISION A GENERATION OF LEADERS THAT CALL UPON OTHERS TO UPBUILD, ENTREAT, AND CONSOLE OTHERS.
​A LEADERSHIP THAT RECRUITS AND NETWORKS INDIVIDUAL AND
COMMUNITY NEEDS WITH ​ALTRUISTIC "PARACLETES."

WE ENVISION A LEADERSHIP THAT TAKES THE TIME TO PARACLETE OTHERS, THUS SPIRITUALLY LIFE COACHING, DISCIPLING, MENTORING, COMFORTING, ADVOCATING, CONSULTING, CONSOLING THEM WHILE BUILDING RAPPORT AND ESPRIT DE CORPS THROUGH VARIOUS ECHOVENTURES AND PARACLETE MISSIONS.

What is an "echoventure" you say?
"Akou" is the ancient Greek word for "to hear."
Today we translate this as "acoustics."
The word "echo" in ancient Greek means "to have, hold fast, possess."
So with these ideas in mind, we refer to echoventure as any venture
in which we "akou" the Spirit of God that "echos" us.
​We seek to echo in the lives of others for eternity.


What is "rex" missions you say?
"Rex" is an ancient Latin term used by the Roman empire of Jesus' day that meant "king,"
and was inscribed in Latin and placed on the Cross.
John 19:19-20 ESV--
"Pilate also wrote an inscription and put it on the cross. It read, “Jesus of Nazareth, the King of the Jews.” Many of the Jews read this inscription, for the place where Jesus was crucified was near the city, and it was written in Aramaic, in Latin, and in Greek."

Yes, it is our last name, but it is also a calling to be ambassadors of the King of kings and Lord of lords and live up to being royal priests in the Kingdom of our God.
By Roman definition a Rex was a reigning king that was a wonderful counselor/ruler.
In Aramaic it is "melek" at it means royal king. {in English this sounds to me like saying- "the One that me like"}

Revelation 1:6 & 5:10-
"And from Jesus Christ, the faithful witness, the firstborn of the dead, and the ruler of the kings of the earth. To Him who loves us and released us from our sins by His blood- and has made us kings and priests to God and his Father; to him be glory and dominion for ever and ever. Amen."

"And have made us to our God kings and priests: and we shall reign on the earth."